Kainani joined our firm in March of 2018. Kainani brings a wealth of courtroom experience, including over eight years as a Deputy Public Defender. In addition to family law cases, Kainani also handles select criminal defense matters.

Kainani is a 2000 graduate of Maryknoll High School and 2004 cum laude graduate of the University of Nevada Las Vegas.  After graduating from Creighton University School of Law, Kainani was admitted to the Bar in October of 2009 and served as a law clerk for Circuit Court Judge Glenn Hara in Hilo. In 2010, Kainani was appointed a Deputy Public Defender where she defended hundreds of clients in misdemeanor and felony jury and bench trials involving all types of offenses, including family abuse and violations of protective orders.  She also filed briefs with Hawaii’s Intermediate Court of Appeals and the Hawaii Supreme Court, appeared at hearings before the Hawaii Paroling Authority, and represented clients in Family Court juvenile proceedings and civil commitment hearings. In 2018, Kainani was named a “Rising Star” by Hawaii SuperLawyers.

Kainani has been an adjunct professor of criminal law at Kapi’olani Community College, and continues to provide court appointed criminal defense to indigent clients.  Her pro bono activities include service on the board of directors of the Hawaii Filipino Lawyers Association, advisor to the Legal Aid Society of Hawai’i’s Access to Justice Legal Clinic, volunteer attorney for the Hawai’i Filipino Fiesta Legal Clinic, participant in Volunteer Legal Services Hawaii’s Juvenile Records Expungement Program, and counselor at the YMCA College Camp.

Outside the courtroom, you can find Kainani on the mats of Ronn Shiraki’s Brazilian Jiu Jitsu Academy training for her next national competition as a Relson Gracie blue belt. 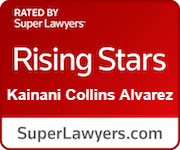 OPEN AND READY TO HELP!
Farrell & Perrault is open and fully staffed and taking new cases! We are following the State and Family Court social distancing guidelines to ensure the safety of our clients. Call us at (808) 535-8468 for a FREE CONSULT.